Swim and Dive Takes on State 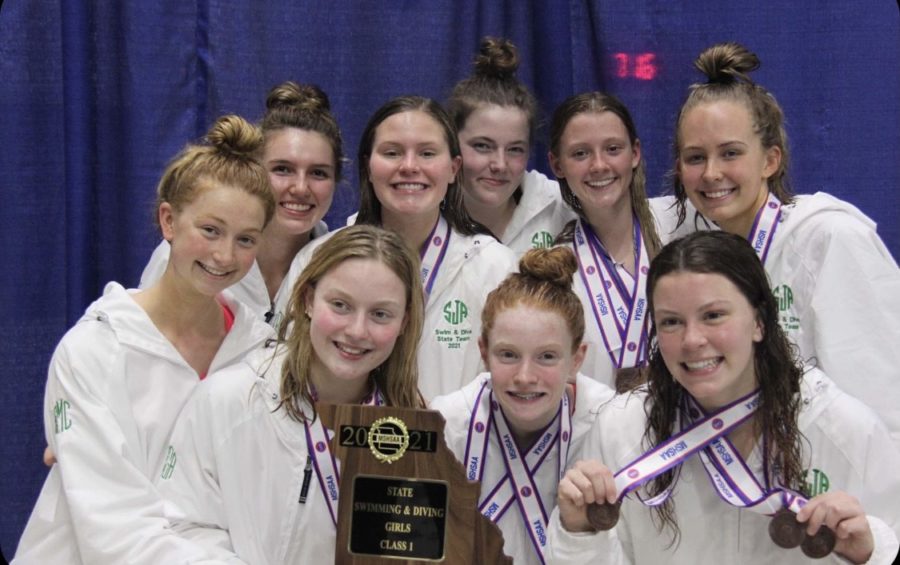 The swim team has worked very hard this past season and it definitely showed when they received 3rd place at state! Many swimmers received individual awards as well.

Two swimmers who competed at state were sophomore Emily Murawski, and junior Alyssa Yelton. Both were on the swim team last year and were excited to go to state this year. They both competed very well and had a blast being there with their teammates.

Alyssa has swam many different races in the past few years. She says competing at state is always “exhilarating,” but can also be “nerve-wracking” because they are up against the best of the best. But it always helps how close the swim team members are.

“No matter if you are best friends with a girl or you just met her because of swim, you automatically feel like you’re best friends,” Alyssa said. “It is the best feeling when you’re doing a flip turn and one of your teammates at the end of the pool is cheering for you and yelling to catch the girl in front of you or telling you to ‘finish it out, you’re almost done.’”

For sophomore Emily Murawski, this was not her first time competing at state nor being on the swim team. Just like Alyssa, Emily really enjoys competing at state and she says it’s because she gets to compete against many different people from all around, the best swimmers in the area. She also loves getting to cheer on her teammates, and obviously getting cheered on during her events! Since it’s the last meet of the season, it’s fun to be with their team and enjoy it together.

“My favorite part of being on the St. Joe swim team is the constant uplifting environment. Every swimmer, no matter the skill level, cheers each other on; it is a very inclusive and positive team,” Emily said.