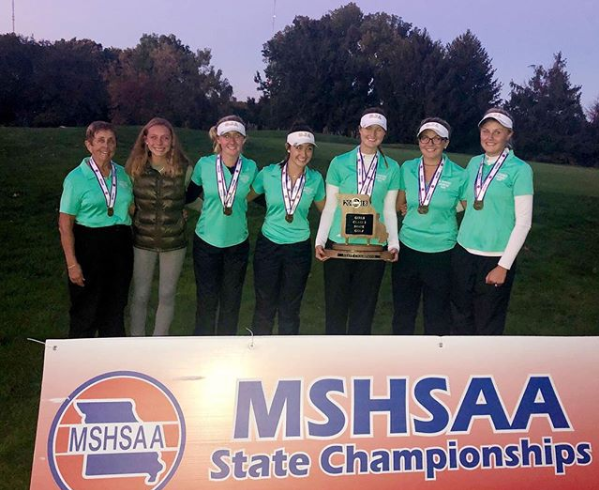 On October 16, The St. Joe Varsity Golf Team completed something that no other St. Louis team has done in golf history: winning State for the third year in a row. They beat Notre Dame de Sion High School by 4 strokes with a total stroke count of 627.

The Varsity team, coached under Carol Fromuth and consisting of senior Lauren Gallagher, junior Grace Armando, sophomores Drew Nienhaus and Nicole Rallo, and freshmen Isabella Arro  and Mia Rallo, dedicated their time and put their full effort into their fall sport. After school each day, disregarding matches and tournaments, the team practiced for about 2 hours at Missouri Bluffs Golf Course. Throughout the season, each player learned to trust one another and improve their skills before entering into the State match.

Nienhaus claims the “best moments at State were when [they] were announced in front of everyone that [they] won” because they all individually received a State Medal, and collectively received their State trophy. She recounts her second year at the State Competition as a “thrill ride” because each player from each team is waiting for the results, anticipating a victory, and hoping for a State Championship.

Armando, describes her journey as “an accomplishment I have hoped for since freshman year.”

She claims winning State for a third time “shows how strong [the] team is as well as their bond!”

Each player spent a lot of time together:  two hours after school each day for nearly three months and hours on the weekends at practices or tournaments. Due to this, the group was able to grow close and support each other.

On a sad note, the team will be losing one of their beloved, key players next year, Lauren Gallagher, seeing as she will be going off to college.

“The best part about winning State is that we did it as a team,” Gallagher said. “I love this team so much and I’m sad that this was my last year, but I’m excited to see everything they accomplish in the future.”

Moreover, the returning players are excited for next year.

“I am personally looking forward to next year to win another State Championship,” Niehaus said.

The players are already predicting another victorious season as they all keep learning, practicing, and improving.