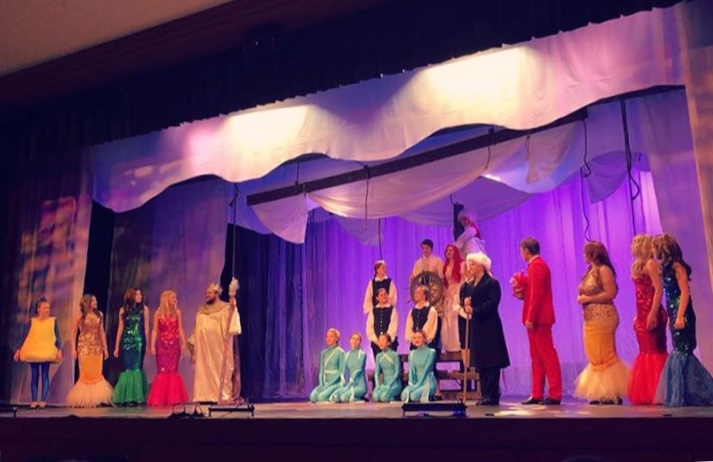 The cast of The Little Mermaid singing their hearts out for the finale.

As the leaves started to fall and the weather became chilly, the fall musical, The Little Mermaid, took audience members on a wonderful journey under the sea and on the beach above. The Little Mermaid, which took the Saint Joe stage October 27 and 28, is based off of the Disney animated film which follows the journey of a mermaid who becomes human in  hopes of capturing the heart of a handsome human prince.

When asked why she decided to choose this show, director Mrs. Albes recollects, “We believed we could cast the show with the talent at SJA. The show also has a beautiful score and would delight a wide age-range of audience members.”

Mrs. Albes’ theory was confirmed by the large audience consisting of a wide variety of ages.

“ The amount of people that came and supported us was unbelievable!” freshman Rosie Schibig, who played the mersister Aquata, said. “I loved how the upperclassmen and alumnae and other people I didn’t know still came up to us and said how wonderful the show was!”

The amount of people that came and supported us was unbelievable!”

“The theatre students at SJA are dedicated, eager and hardworking. It is a true joy to come to rehearsal and work with these ladies,” Mrs. Albes said.

The entire cast and crew agree that the community was the best part of the experience.

“The Little Mermaid was overall one of the most amazing experiences of my life,” senior Meredith White, who played Ursula the sea witch, said. “I couldn’t have asked for a better cast and crew with which to perform in my last musical.”

“The cast was amazing and I loved getting to grow closer to them! The show was so fun and something I will never forget!”

But as the curtains come to a close and the bubble machine is turned off, the St. Joe community wonders: What’s next?!

Answering this long awaited question Mrs. Albes shares, “All I can say is…fun times ahead! I can’t wait to reveal the musical revue!” And as the the St. Joe community looks forward to that announcement, the winter play, Our Town, comes to the stage in February!